One Night In Bangkok

NBangkok; the capital of Thailand and the gateway to South East Asia.

It’s the first destination for all travellers visiting Thailand, young and old. Drawn to Thailand by the pristine beaches of the south, the tropical jungles of the north, the cuisine, or simply the cheap booze and soapy massages, Bangkok has everything you could ever need, and more.

Arriving at Suvarnabhumi airport late at night I was greeted by a throng of wailing taxi drivers, all eager to take my money. Tired and sweaty, I jumped in the first taxi in the queue with a couple of other guys I had met. If travelling alone, sharing a taxi with other travellers is a really good way to save money.

Headed towards Khaosan road; the touristic epicentre of Bangkok, I wasn’t sure what to expect.  This famous street is where most travellers and tourists head to when visiting Bangkok.

Now, Khaosan road can be viewed in many different lights. To the young, carefree western traveller it’s the perfect mix of cheap alcohol, cheap food, and unadulterated debauchery. On the other hand, I can’t imagine my Mum particularly enjoying an evening on the fabled strip. (In fact she did!) 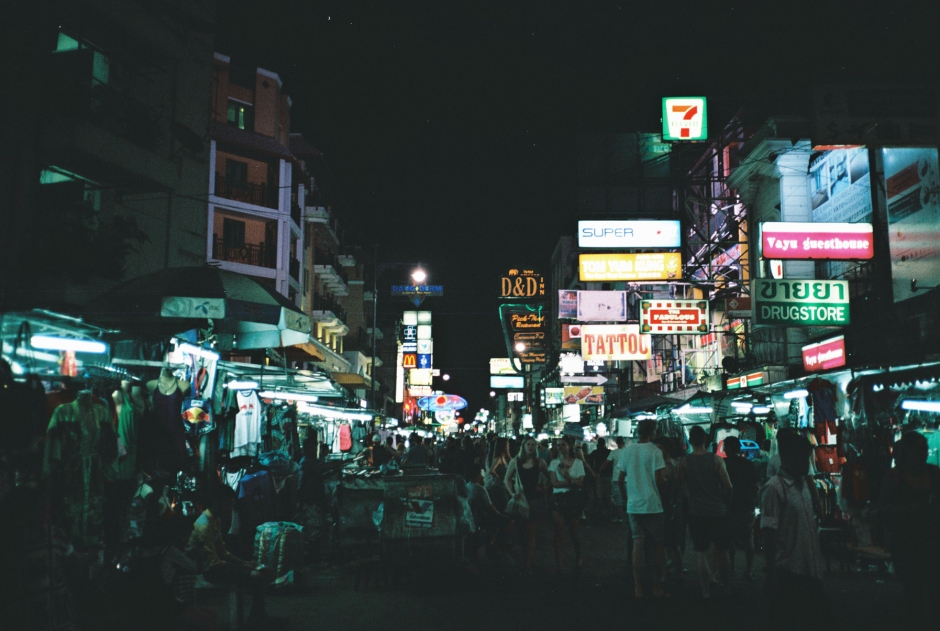 With so much going on and so many like minded travellers in the same place, Khaosan road is the perfect place for solo travellers to meet people- hence it being so popular. The neon-lit bars and clubs pumping out western music and serving cheap drinks, the street food stalls selling pad thai and the budget hostels that rise above make it ideal.  In one sense, it’s a travellers dream. However there is a slightly darker side to Khaosan road.

You’ll instantly be preyed on by street sellers with anything from carved wooden figures, to tickets to ping pong shows. The comical cockney accents adopted by little Thai men in an attempt to lure you in is hilarious and unnerving in equal measures. Even more unnerving was the amount of balding, rotund white men running away from reality with small Asian ‘girlfriends’ on their arms.

The sex trade is no secret in Thailand but until you see it first hand, it’s hard to comprehend! It’s not just Thai women that are being taken advantage of though. Exploited children walk up and down the streets selling roses and other tack geared towards drunken tourists.

3 Places to See in Morocco