The Way Of The Roses

Last year, whilst clinging on to the summer, a good friend, Ivan and I tackled the Way of The Roses coast to coast bike ride. Both being fanatic cyclists and outdoorsmen, we decided that a three day bikepacking trip was the perfect way to spend a weekend.  The name, Way Of The Roses, makes reference to the red rose of Lancashire and the white rose of Yorkshire – the county in which I met Ivan at university.

The route stretches from the West coast of Lancashire, in Morecambe, to the far East stretches of Yorkshire, in sunny Bridlington. 175 miles through the finest northern counties, over the Pennines mountain range that makes up the backbone of the country, and down the other side. It’s the first multi-day bike trip I had embarked upon, and something I had been wanting to do for some time.

So, we set off, bright eyed and bushy tailed from Morecambe seafront at 8 am on a typically British summers day – wind howling, rain coming in sideways. 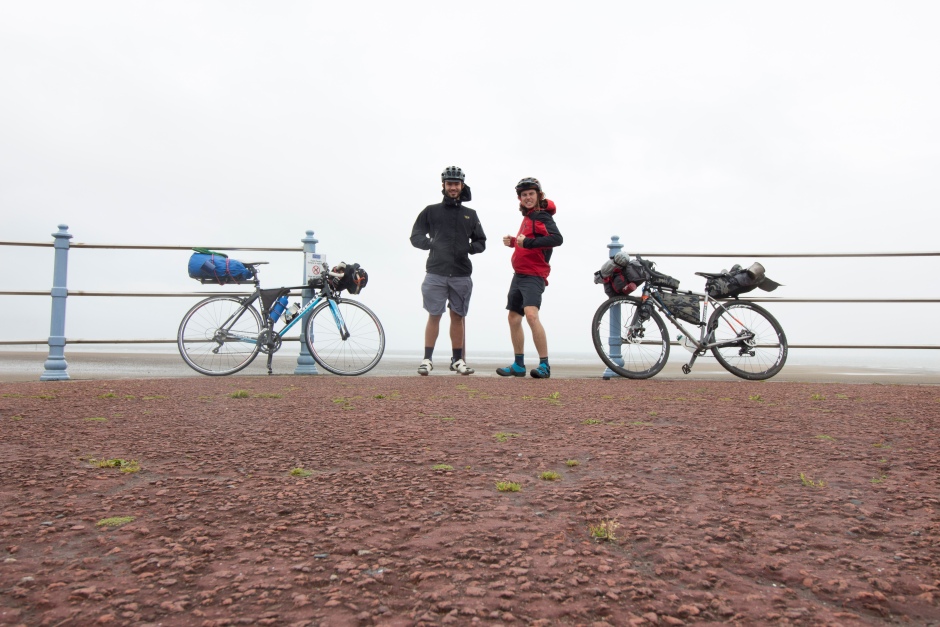 The route is one of Sustrans‘ newest, and most clearly marked routes. The signposts led us out of Morecambe and onto a disused railway line/cycle way which headed east towards Lancaster, and then out onto the rolling moors.

A couple of hours in and 35 miles down, we entered the Yorkshire village of Settle. A quintessential English village with, possibly, the nicest sign of any village. Having looked at the terrain map before setting off, and having read up on the route, we knew that there was a lengthy climb out of Settle. Undeterred we decided a sandwich from Ye Old Naked Man, and a couple of pints of local ale in the sunshine were needed.

So, full of beer and laden with red wine and food for the evening, we attacked the hill out of Settle. They weren’t wrong when they said it was steep!

As we reached the top of the hill, gasping for breath, there was the sound of running water in the distance. Having looked at the map previously, we knew there was a waterfall close by.

Leaving the bikes propped behind a dry stone wall, we made the short descent down to the water for a well earned dip in Scalebar Force. 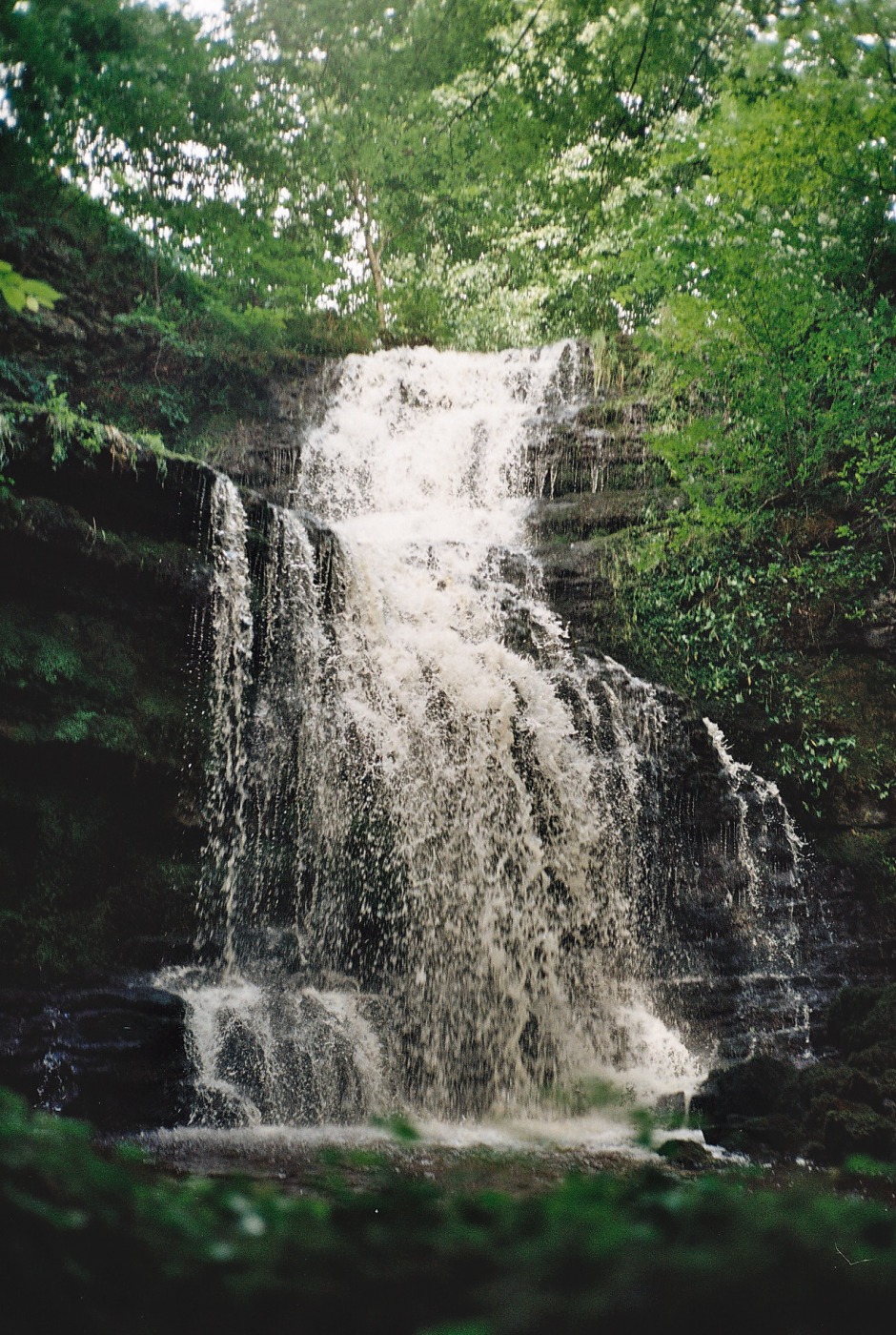 The following 10-15 miles were much more leisurely thanks to the beer and that hill. Nonetheless, the scenery was spectacular and we were within touching distance of our first camp spot – Malham Cove. 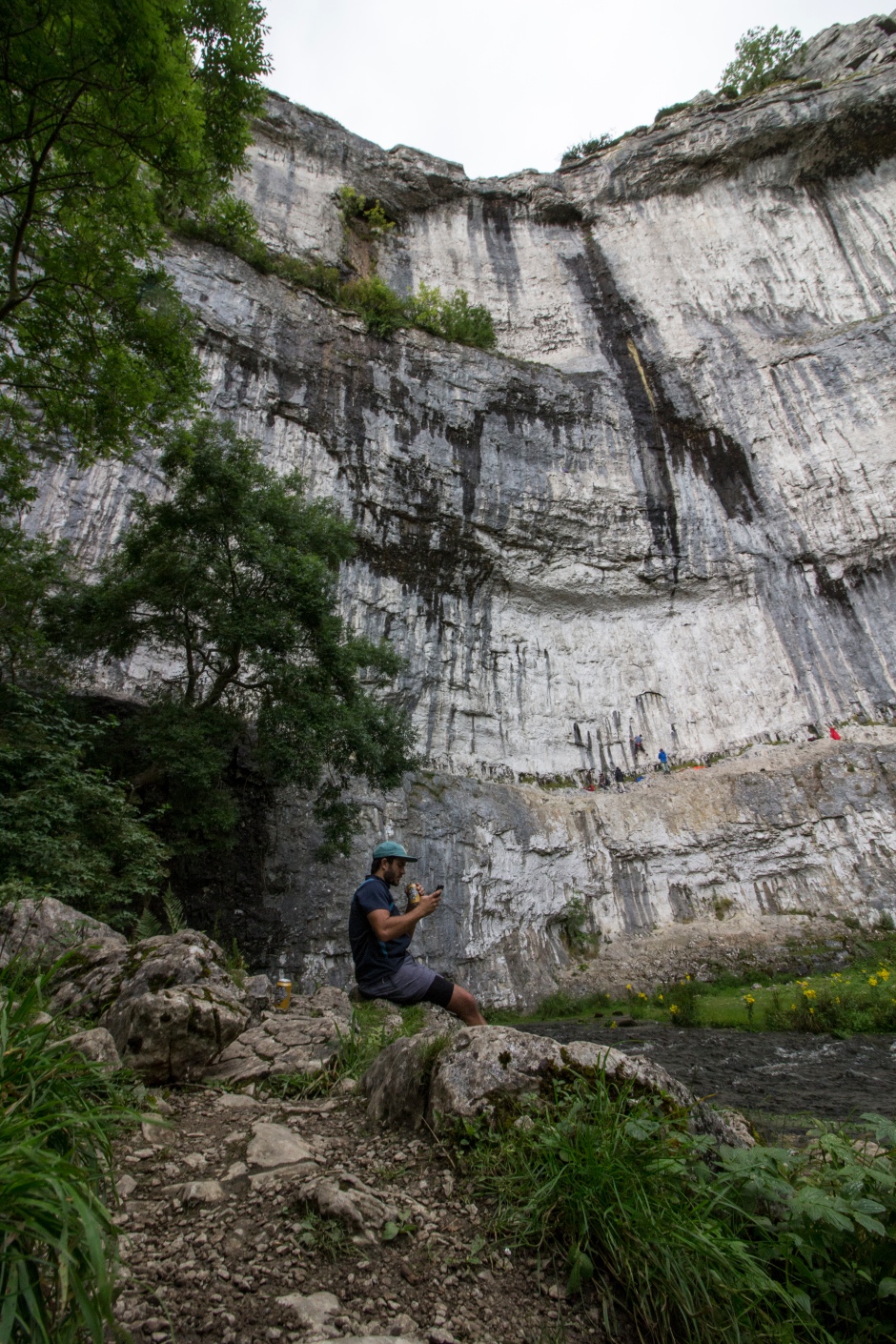 Despite the slight deviation from our path, we decided Malham Cove would make a perfect spot to to camp. The cove was much more touristic than we had thought, however it was a pretty sweet spot to kick back and slurp a couple of stubbies whilst watching the climbers tackle the second pitch overhang. 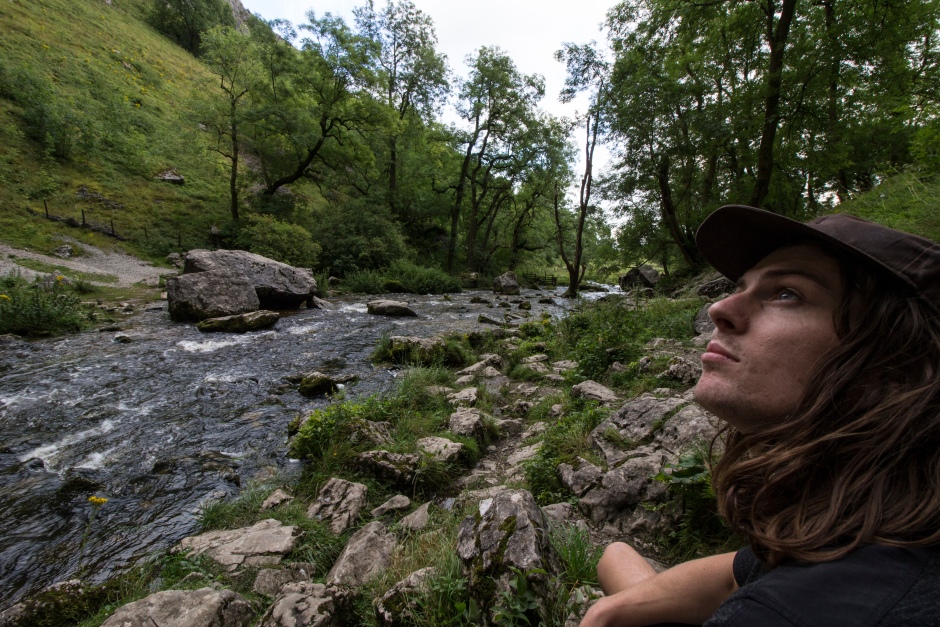 Whilst sat staring up at the face, we decided that setting up camp at the top would be much nicer, so we mounted the bikes and headed up hill once again. It soon became apparent that there was no road route to the top so we chucked the bikes over a gate and began the slog to the top. 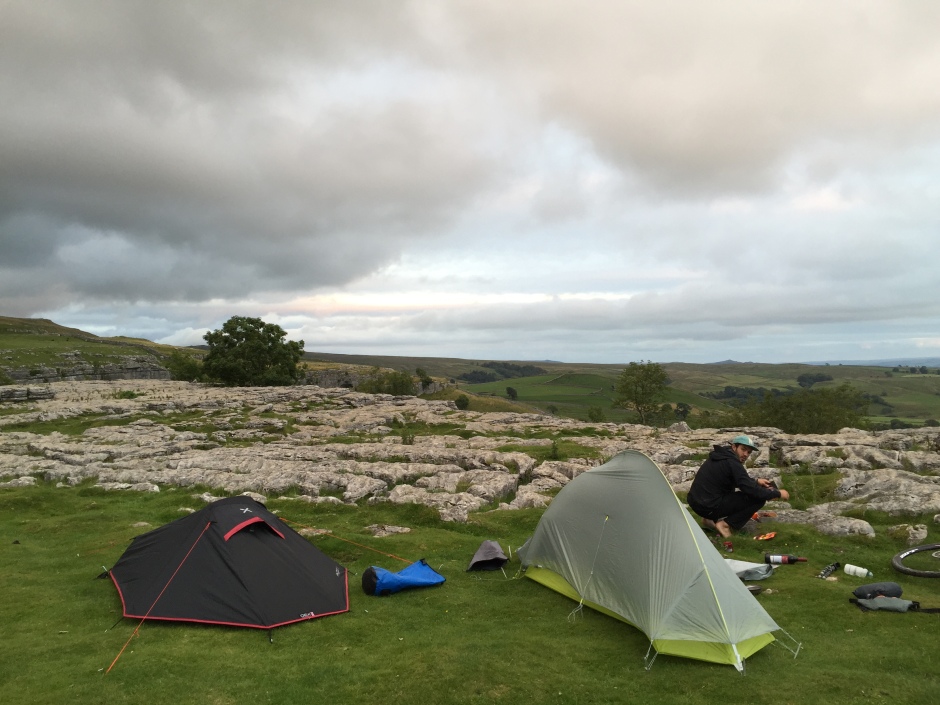 After a few beers and a bottle of red the night before, we woke up feeling a little less fresh than planned. And no sunrise!

To make matters worse, the realisation that we hadn’t hit our mileage quota on day one meant that we had 80 miles to get through to our second planned camp spot, York. After burnt oats for breakfast (my bad) we set off to find a gate to get out of the fields and make some miles up before lunch time.

The first 15 miles between Malham and Burnsall were a breeze. But then we hit it.

A ten mile slog up hill.

Who said all the climbing was done on day 1?

Our reward for the ten mile climb was a super steep (and technical) descent in to the village of Pately Bridge where we stopped for a rest and re-fuel. I’d read about the dangers of this hill before the trip and I can see why there are so many accidents on this road. 20%+ gradients and tight corners on narrow lanes make for interesting riding!

After a small hilly section out of Pately Bridge, we were faced with 35 pancake-flat miles through endless farmland towards York.

As we approached York via the cycle track, the sun came out, so it seemed fitting that we head through the town and down to the quay to have a look what was going on. The pubs were spilling out on to the river bank with people enjoying the late summer afternoon. It would’ve been rude not to join.

A couple of hours, and a few pints later, we decided it was time to make a move to our camp for the night. Deciding to head out of the city, we were aiming for a small woodland which lay on the route – Hagg Wood.

Following a quick burn through the woods enjoying the single tracks (realising that my make-shift set up wasn’t up to it), we found a good enough spot for the night, which offered a view through the trees of the sun setting over the fields.

After a short breather stood admiring Ivan’s bike, propped majestically against a tree, glimmering in the sunlight, we set the tents up and got some food on.

The crispy forest floor was amazing for finding kindling for the fire, but awful for paranoia. Any slight sound in the distance triggered the thought that someone, or something was joining us in the woods that night. To bottle of red helped to calm the nerves and we were soon fast asleep in our rustly bed of leaves. 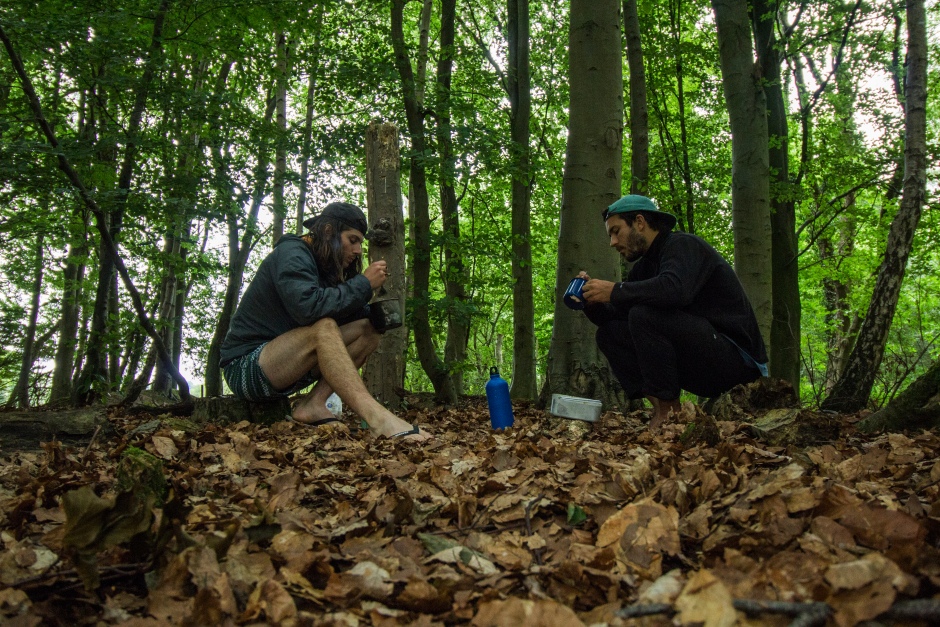 Waking up on the final day with leaves in my sleeping bag, with heavy legs and heavy head, with the prospect of 60 miles to the finish, followed by a 4 hour train journey back across the country to Lancaster, and then a drive home before work the following day; I felt less enthused than the previous day.

Nonetheless, after getting up and getting a brew on, we were hyped for the final day! 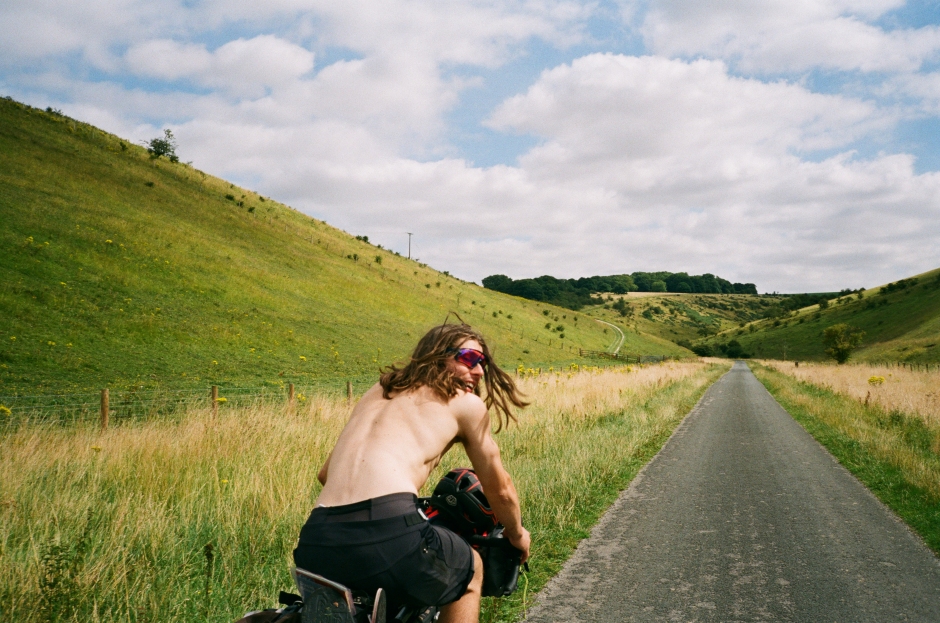 Ivan enjoying the late summer sunshine and the wind through his hair.

The riding on the final day was mainly flat, with a small section of climbing in the Yorkshire Wolds before a never ending run down to the coast, and the finish line. 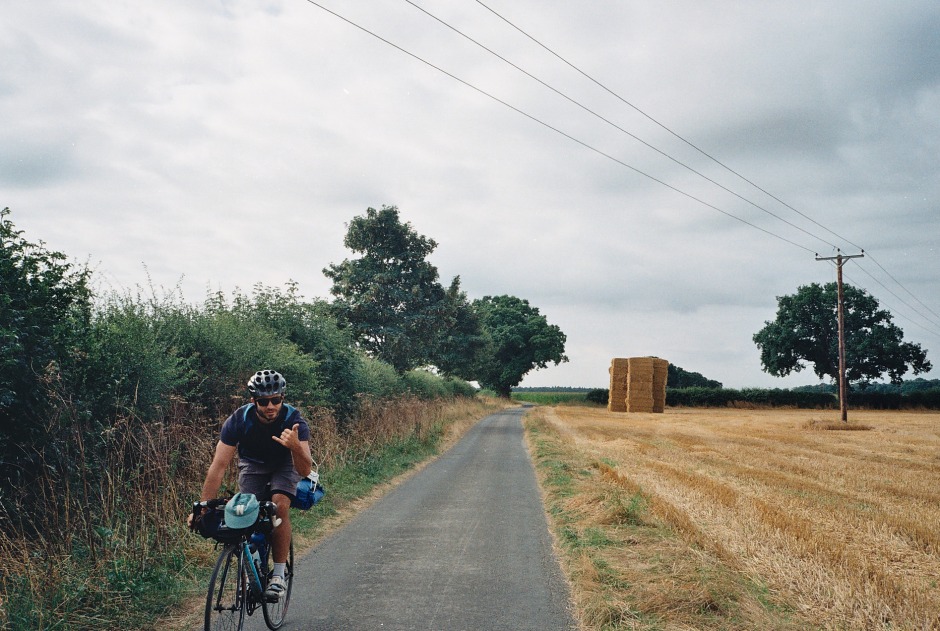 I’d highly recommend this route to anyone looking to take on a multi day bike trip. The scenery is stunning and the route is excellently marked out. I am now on the look out for a new bike and full set up for my next trip though!

A Weekend in The Peak District